We set up shop along a rural highway 6 years ago because we needed studios and we found a great space with room for a gallery.  It’s a crap shoot.  Some people only want directions or a bathroom.  Some people want to sell you something.  Some people want to spin yet another yarn about why they need gas money to get to Taos.  But all-in-all I would have to say that most people are interested in what we are doing and many of them buy a little something.

Sometimes people walk through the door who do not feel like strangers. You haven’t met them before and you will never see them again.

I had just sat down to look at my calendar for the day Monday morning when James, a man in his late 70s, shuffled in.  I called out, “Hello!” and got up to meet him.  He announced that he was “waitin’ on the wife.”  I joked that I was “waitin’ on the hubby.”  His wife, Donna, worked her way in slowly.  She announced she had read about us (Questa Studio Tour) in the paper and said they had to stop.  “We realized we were in Questa and had passed you so we turned around,” she said.  I was completing the “we make everything here” spiel when Roger drove up.  I don’t usually make coffee for customers but I acted on impulse and suddenly we were making cafe au laits with Donna’s coconut almond milk.  Roger and James sat on the porch waiting for the eclipse while Donna and I solved the problems of the world.  When the eclipse came, Roger pulled out his cereal box with pin projection and we all looked.  They gave us a large bag of raw sugar.  Two hours later, we boxed up the jewelry and pottery they purchased and wished them well.  I feel so grateful and mystified by these encounters.  You don’t know or need to know one another’s politics or religion.  You come from different worlds, perhaps, yet arrive together at a juncture where connection is possible, even inevitable.  Maybe it’s like that orange gladiola that sprung up amidst the cosmos in our garden.  The happenstance reminds us of hope and magic still in this world! 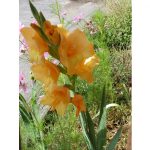